I know you’ve all just been DYING to know what happened in our Season 13 Opener!

Next time if you don’t want to wait on me for a recap (Panda’s are really lazy sometimes, you know? 😉 ), you can relive all of the past excitement on Vimeo!

But since you’re here, let’s get on with it!

Aviator’s jammer, Ivana Hercha, starts the bout out with a quick sprint out for jammer lead and putting the first 2 points on the board in just 10 seconds! Her fellow Aviator jammers, BB5 and Jacklyn Hyde, follow her steps and the Aviators dominate lead jammer status for a few jams.

OBA and Aviator blockers shut down their opposing jammers, BB5 and Ripples respectively, as the teams have a standoff on the pivot line. Finally Ripples breaks free for an OBA lead, but BB5, without hesitation, makes a quick panty pass to Razor WreckHer. With Razor hot on Ripples’ tracks, Ripples is forced to call the jam.

Jacklyn Hyde makes herself known to OBA as she weaves her way through their defense again and again. She seems to have developed a “signature move” as she, on more than one occasion, keeps herself in after a solid hit, while teetering on the edge of her skates!

About halfway through the first half, we see brief game of jammer leapfrog, in and out of the penalty box. (Giving the NSO’s a good mental workout!) 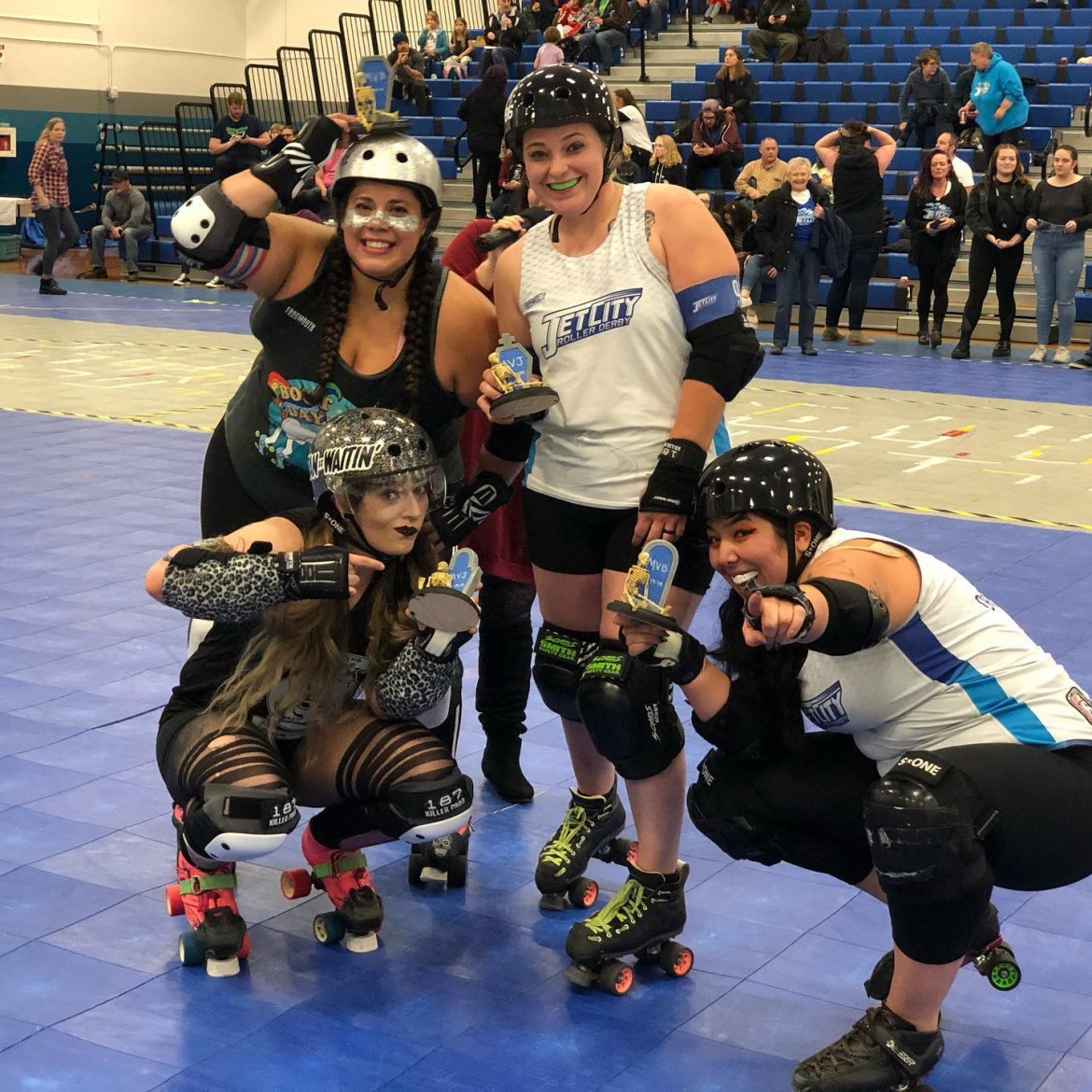 The Aviator blockers steal the show with some back-to-back smart plays, stopping OBA in their tracks. We see Bitch-n-Chips take an open almost-too-easy inside lane, but it’s a trap and Ruby Ruckus steps into position just in time to knock the jammer out, forcing her to recycle. In the same jam, the Aviator blockers knock Chips out again, and Ruby sneaks back behind the others before Chips has a chance to step back on, causing the jam to end with the OBA jammer in the box for a cut track!

Near the end of the first half, we see Aviator defenders Kat and TFO doing a fantastic two-person wall against the OBA jammer as the last Aviators standing! (Where did everybody go?! Even the jammer!)

OBA jammer, Sheriff of Naughty Ham, finishes the first half strong for OBA with an unchallenged 12 point jam, thanks to some killer offense, closing the point difference to just 68 to 84, Aviator lead.

OBA comes back from the half looking the close that point gap even more, grabbing lead jammer status for the first several jams. Jack puts an end to OBA’s point spree as she grabs lead jammer and her own 12 unchallenged points for the Aviators. (Sometimes all you do is blink, and you’ll miss Jack sneak by on that inside line!)

Both teams seemed to have a better understanding of their opponents, matching blockers to jammers as the teams take turn with lead jammer status. Nonetheless, Aviators manage to widen that point gap to a more comfortable state. BUT, there is still much more derby left for OBA to catch up!

About half way through the second half, the teams decide to shake things up as both Aviators and OBA send up-until-now-blockers, Thigh Fighter and Hippo Pottymouth, respectively, out to jam. As Thigh Fighter is sent to the box, Hippo Pottymouth uses brute force to push the Aviator wall around the track. Just as she makes it out with lead status and thinks she is home free, Razor Wrecker catches up and knocks her out. Hippo Pottymouth says “I’m over this jamming business”, and calls off the jam.

Looking to try a different tactic, OBA jammer, Miso Hungry, starts the jam off with an immediate star pass to pivot, Ripples, who, positioned ahead of the Aviator pack, is now free to start her scoring pass before anyone has time to react! Despite sacrificing the chance to get lead jammer status, OBA snags themselves another 16 points for the jam! What a maneuver!

As we near the end of the bout, Aviators start to mix things up a bit. Aviators put Katastrophic in for the first time as jammer. With the help of her blockers to keep the pack in the back, Kat is able to stretch the OBA defense out until she gains lead jammer! In the final jam, Mai Tai Smashya dons the jammer panty for the first time, and the Aviator defense does it again, holding onto the OBA jammer, Taco Belle, back just enough to allow Mai Tai to push through for lead. Mai Tai makes it around and calls off the jam before Taco Belle has a chance to catch her.

Here in the second bout of the evening, Grunge City’s jammer, EllaPhobia, gets things started with a quick out for lead and a quick 4 points for Grunge. However, just as quick, she is sent to the box, giving Aviator’s, Medikate, a chance to catch up. EllaPhobia, out of the box, makes a graceful leap over the apex AND over Simone LeBomb! This 2 minute jam ends 12 to 3, Grunge City.

Jacklyn Hyde is back on the track, skating now for the Skyraiders! Despite going into her second hour as jammer, (I’m exhausted just watching her!) Jack once again works her magic to grab jammer lead and 4 more points for Skyraiders!

Next we have a jam that is all legs, with Deadly Long Legs versus Legs Get’em on the jammer start line. Deadly Long Legs proves to be the faster Legs as she grabs lead for Skyraiders and 4 more points before calling off the jam.

The Skyraiders and Grunge City Rollers are definitely giving us a anxiety-inducing game of Point Lead Leap Frog! At 10 minutes in, the teams are tied 20:20! 7 minutes later and they are tied up again with 31:31!

Jack brings out her signature move again with a beautiful toe stop pirouette along the inside after a nice hit from Grunge, managing to stay in, to stay upright, AND to grab lead jammer. Unfortunately, EllaPhobia is hot on her tracks, and Jack is forced to call off the jam before scoring any points.

This is followed by a high impact, high speed race (true to the derby name, right?) between Deadly Long Legs and Grunge’s Keedy as they hit the pack and break out in seconds, Legs just a hair out in front for lead jammer. As the two race around the track, Skyraider blockers move themselves as far out in front without breaking pack, to allow Legs the chance to pass the Grunge blockers and call off the jam before Keedy can reach them! What a smart pack play!

Just before the end of the first half, both teams try a new angle as Skyraider’s Angelica Della Mote and Grunge’s Haz Yo Key don the jammer panties for the first time. The score stays even as both grab one more point for each team. But, if anything, they’ve let their fast moving jammers a small break (I’m sure Jack appreciates one!)

At the half, Skyraiders have established themselves a bit of a lead, but only by 14 points! 73 to 59 is still anyone’s game!

Early into the second half, Skyraiders are given a power start. At the whistle, the Skyraiders blockers, as one, skate in the opposite direction to intentionally break the pack with no one player at fault. This allows Jack to push the front blockers forward enough to gain lead. That’s teamwork!

A few jams later we see a beautiful, solid hit out by Simone leBomb, knocking Haz Yo Key out of play. Meanwhile, Chic-let’s Rock speeds around the track as lead jammer and ends with an 11 point to 0 jam!

About halfway through the second half, we see Chic-let’s Rock jamming again and solo blocker, Killer Tofu, take on the whole grunge line-up! (The penalty box is overflowing with Skyraiders!) Grunge jammer, Legs Get’em, goes one-on-one against Tofu, is delayed for a moment, but makes in through for lead. Without hesitation, Tofu runs back to give some offense to Rocky, and, with it, Rocky slips along the inside line not far behind Legs.

Later, after a lengthy official review, both the Skyraiders and Grunge jammers starting the jam in the box. On the whistle, the two jammers make a mad dash out and Deadly Long Legs, out front, hits the pack like a rocket and breaks through instantly for lead. On her next scoring pass, she FLIES over the apex! (She makes it look so effortless!) Meanwhile, her defenders work together to hold the grunge jammer, Amelia Bare-Heart. Eventually, she gets the star passed to her pivot, Velvet Hammer, but the jam is called before Velvet can make it around, landing Skyriders with a nice 16 to 0 jam!

As we near the end of the bout, we see Angelica put on the jammer panty once again and she does NOT disappoint for an exciting last jam! Weaving through the grunge blockers with an ease and grace (like she didn’t just play derby for a whole hour!) she grabs jammer lead status. With the crowds screaming for her to keep going, the time runs out and Skyraiders end with a whomping 21 point jam!

Next up in your JCRD Season 13: the Food Fight FUNdraiser Bout! 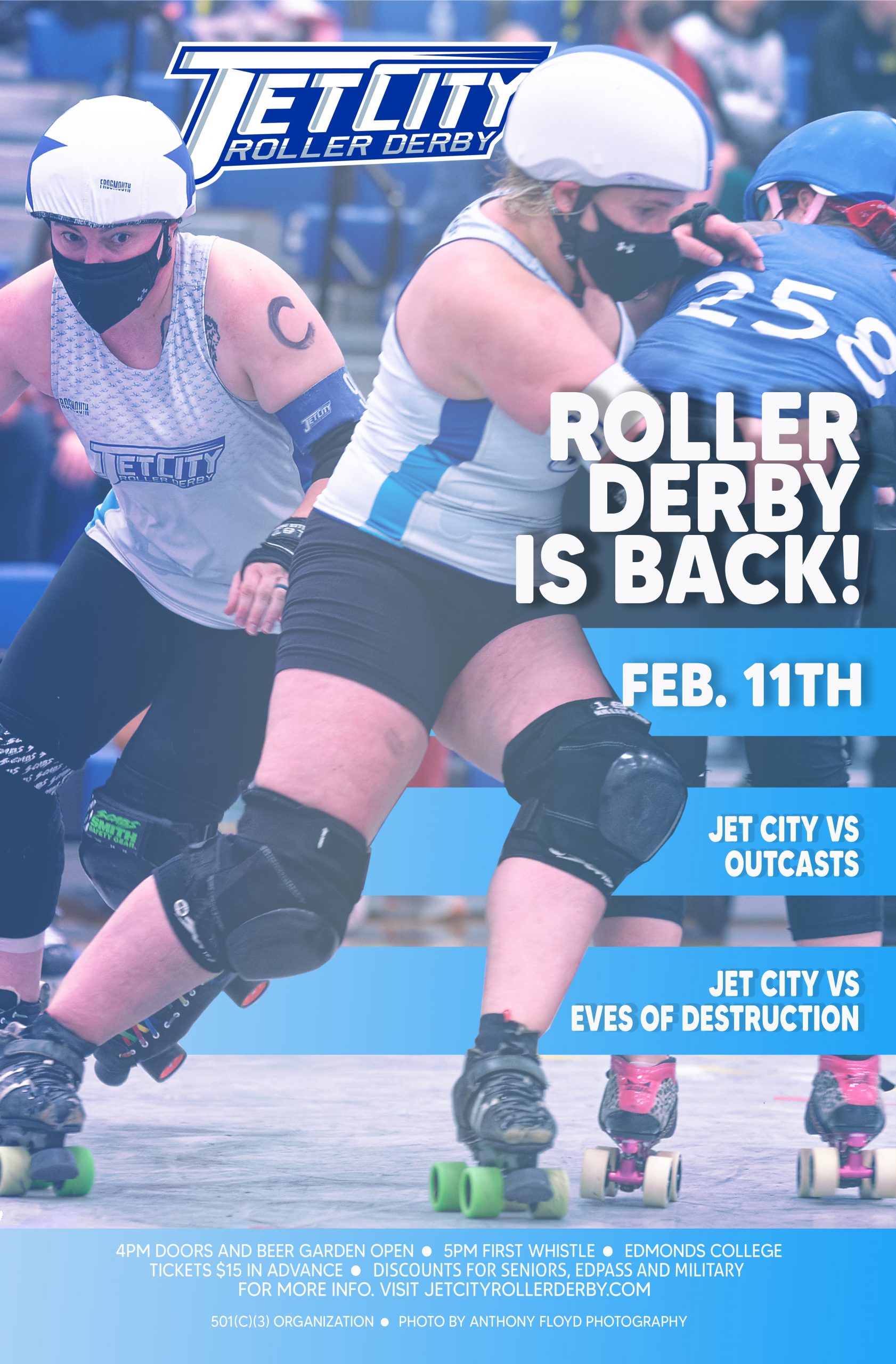